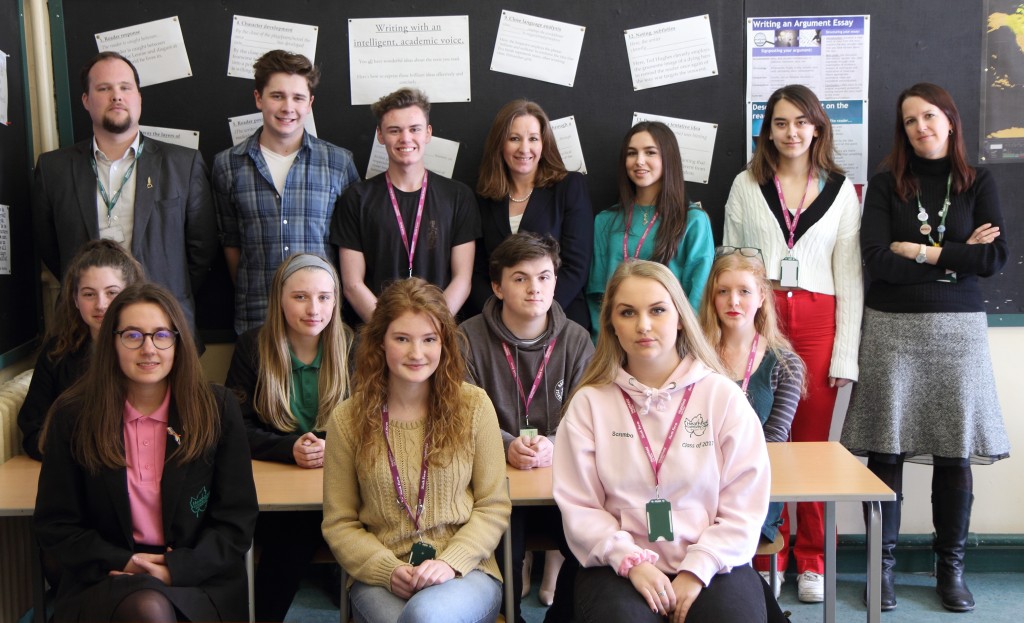 Heathfield Community College students are calling for immediate action on the climate crisis, with students from across the college demanding for politicians to prioritise the environment to protect the future for the next generation. While young people across the world prepare for the Climate Strike on Friday, the students who remain focused on their studies in College have put together an articulate plea to policy makers, urging them to take action now.

“All too often, young people are characterised as apathetic and self-involved, but the strike emphasises that we are united and outward-looking enough to make a strong statement about the urgency of the situation,” school newspaper editor, Louisa Dollimore. “Our futures are being stolen from us in a crisis that we didn’t create: we are growing up in an uncertain world, in which we don’t know even what the next thirty years will bring. There has never been a moment in history in which the fundamental stability of our existence has been threatened in the same way: this is what our generation is facing. The climate crisis needs to be tackled today, not tomorrow.”

“The rising anger among young people reflects a growing frustration with the lack of acknowledgement of the threat facing our planet. The climate has been ignored by political leaders and older generations in favour of other short-term issues – though global warming is the most immediate, pressing matter facing us today,” added student writer Georgina Sharma.

“As the Eco Reps of Heathfield Community College, this is an environmental issue that we feel very passionately about. We would like to help to raise awareness of climate change, a global catastrophe, and we would like to inspire others to do their bit to make a difference, no matter how small.

“Since the Eco Rep scheme begun in 2018, we have achieved many successes, aiming to reduce the college’s environmental impact. One of our first action was to reduce the use of plastic cups in the school canteen. We are now managing to use 28,000 fewer plastic cups annually. We have also completed successful litter picks in our local area and we have raised the profile for Switch Off Fortnight which takes place every November.

“Our main goal currently is to improve the school’s waste disposal system through the promotion of recycling and lowering the use of non-recyclable materials. The school has been very supportive of our actions as Eco Reps and it goes to show that if we all come together we can collectively make a difference.”

Geography A Level students, Lottie Baird, Carmen Law, Bayden Germain, James Logie are furious: “Climate change is a major issue that will not only affect us now, but also our future. We have inherited a vicious disease that is going to kill our planet with us on it; all because of the greed of previous generations. To this date, we have already released 1010gt of CO2 which is suffocating our planet, according to the International Panel on Climate Change. As of the year 2000, we only had 335gt of CO2 left to release if we want to keep to what they call a “safe level” of global warming and before our planet faces a long term and permanent change. Most of this has already been used. We can only have a +2°c increase in temperature before our ‘tipping point’; a state of immutable change. Sea levels will increase by 1.04m which will cause the drowning of major cities such as Amsterdam and New York, this is only 5 years away. With our increasing population, food supply is a major issue and warming temperatures will see a drastic fall in our ability to grow food in many parts of the world. Is it any wonder why we are angry?”

Becky Hamilton and Henry Heard, A Level students and active members of HCC’s Debating Society explained: “Direct action as a form of protest has been given a bad name. Critics of the thousands of teenagers all over the world striking this Friday say that these teenagers are merely looking to bunk off school, that lobbying in the form of petitions and letters is a much better approach. More democratic. Yet, when asked on 12 February, days before the first UK protest, Huw Merriman had no idea that his teenage constituents were striking. Clearly, the MPs’ priorities are not teenagers’ issues: why would we think they’d listen to us if we wrote to them?

“Direct action, unlike letters to MPs or petitions, can’t be ignored or discussed briefly to fulfil legal obligations. Perhaps it says more about our political system that teenagers feel the need to miss education and jeopardise their exams in order to be heard. With no vote and the sense that our MPs aren’t listening, direct action is where teenagers feel they must go to force change. The issue of climate change is so pressing, and so ignored – by Donald Trump pulling out of the Paris agreement for instance – that something shocking is the only way to bring it to the fore.”

The school takes environmental issues very seriously and has an enthusiastic group of Eco Reps, who ensure that environmental concerns are at the forefront of the school community’s thinking.

Should teenagers be allowed to go on strike?  Headteacher Caroline Barlow explained the dilemma for educators on this issue. “A school cannot authorise absence for this purpose. A parent can withdraw their child but must be willing to accept the consequence of a fine. Headteachers rightly have safeguarding concerns for those who miss school yet whose whereabouts is unknown in uncoordinated events such as Friday’s marches. So ironically, although righteously angry, eloquent and competent, teenagers are still reliant on adults to approve their right to strike. Technically going “on strike” requires an element of personal sacrifice, usually a day’s pay. Losing a day’s learning is a personal sacrifice but is perhaps a protest rather than a strike.

Peaceful, powerful protest has a valuable place in a civilised, democratic society; much good has historically come from it. Teenagers must be able to form, express and share their views. To experience a range of forms of political debate. They have a breadth of tools at their disposal: Persuasion through lobbying, petitions and collective intent; Non-Cooperation and Economic Boycott; the teenage pound would be powerful if withdrawn from Fast Fashion or Food outlets. Who better than to manipulate the media, music and the arts than the young. These would be legal, powerful and persuasive; supported by their education not requiring its sacrifice.”